Overview of the Elk Creek Project 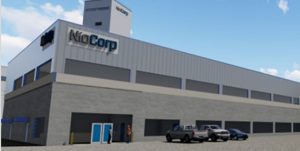 CAD Drawing of one of NioCorp’s planned surface facilities in the Elk Creek Critical Minerals Project.

NioCorp is developing North America’s only niobium / scandium / titanium advanced materials manufacturing facility co-located with an underground mine.  Located near Elk Creek, Nebraska, this will be the highest grade niobium project in North America, as well as one of the largest prospective producers of scandium in the world.

Niobium is a relatively scarce metal and there are only three primary Niobium mines in the world today.  But growing demand has created a global market value of >$5 billion.  Niobium is considered so critical by the U.S. that it is one of a small handful of metals that the National Defense Stockpile purchases, according to DoD Strategic and Critical Materials reports.

What We Intend to Produce

According to NioCorp’s June 2022 Feasibility Study, the Elk Creek Project is expected to produce the following over its 38-year operating life:

Ferroniobium (FeNb):  An average of 7,348 tonnes per annum (tpa) of ferroniobium, a crucial component in high strength, low-alloy (HSLA) steel that is increasingly used in bridges and other large infrastructure projects, as well as in high-pressure oil and gas pipelines, steel-chassis vehicles, commercial aviation, aerospace, defense systems, and in many other applications.  Niobium also is a component of superalloys used in nearly all jet engines and power generation turbines.

Scandium Trioxide (Sc2O3):  An average of 102 tpa of scandium trioxide. Scandium has important uses in environmentally preferred Solid Oxide Fuel Cells, as well as in ultra-high-performance aluminum alloys.  Scandium greatly strengthens aluminum alloys and allows them to be reliably welded, which presents revolutionary potential for the commercial airline industry.  For example, between $1.0-$1.5 million of scandium oxide in a single airliner offers $21-27 million in net present value fuel savings.

Titanium Dioxide (TiO2): An average of 12,063 tpa of titanium dioxide. Titanium has the highest strength-to-density ratio of any metallic element, and it is used in wide variety of sectors, including aerospace, national defense, chemical processing, desalination, automotive, health care, communications, sporting goods, and many others. Titanium in its oxide form also is used in the manufacture of pigments in paints, plastics and paper, and is a photocatalyst.

The Elk Creek Project has been designed to minimize the environmental footprint of niobium, scandium and titanium production.  For example, the project will recycle a significant portion of its planned waste streams into usable materials, thus reducing both costs and environmental impacts.

See the short video below on the project and the remarkable critical minerals it expects to produce here:

The Elk Creek Project is highly de-risked on multiple levels:

1 This summary includes certain forward-looking non-GAAP financial measures, including EBITDA and Operating Cash Flow.  Reconciliations of these forward-looking non-GAAP financial measures to the most directly comparable GAAP financial measures are not provided because the Company is unable to provide such reconciliations without unreasonable effort, due to the uncertainty and inherent difficulty of predicting the occurrence and the financial impact of such items impacting comparability and the periods in which such items may be recognized.  For the same reasons, the Company is unable to address the probable significance of the unavailable information, which could be material to future results.